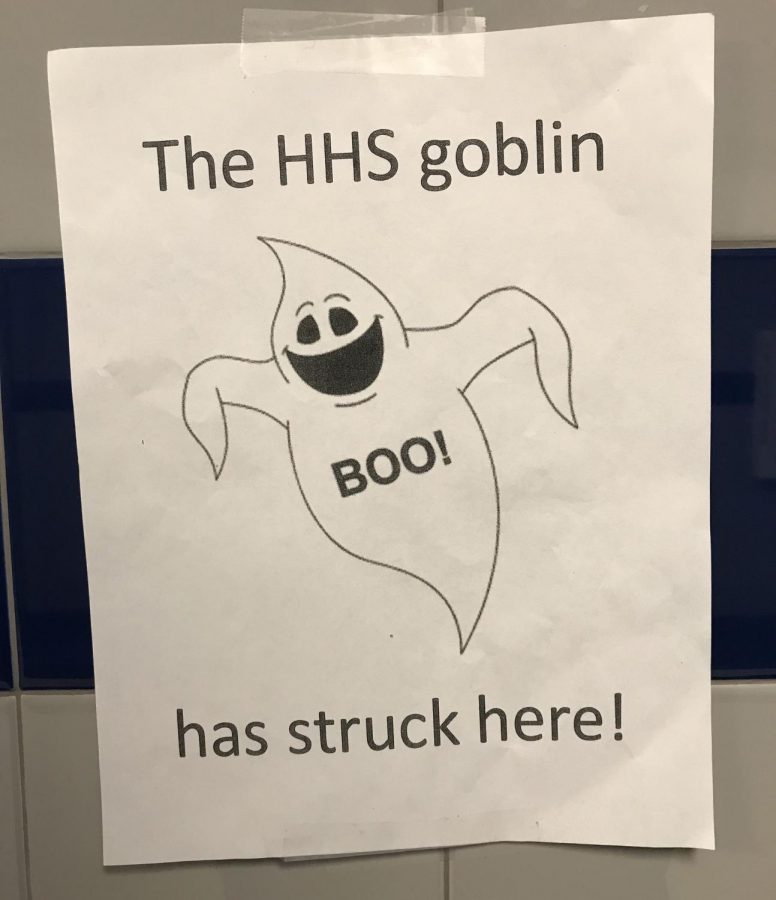 HHS Goblin flyer that teacher’s use to give each other gifts.

The sound of fun-sized candy wrappers being poured into a bowl, the exciting cheers of kids as they skip ahead with plastic jack o’ lantern buckets, and the noises that eerie decorations make as they come to life under the moonlight. These things are associated with the holiday that rolls around at the end of October: Halloween.

Halloween has more recently been known as a holiday where friends and family huddle around a huge bonfire to hand out candy to little ones. However, Halloween, also known as All Hallows’ Eve, had a completely different start.

Halloween goes all the way back to pagan times, and is one of the oldest holidays celebrated, originating in the British Isles.

The holiday started with an ancient Celtic festival called Samhain that started around 2,000 years ago. The celebration included people making huge bonfires and wearing costumes of animal heads and skins to ward off evil spirits.

The day of November 1st marked the end of summer, an important time of harvest, and began the time of coldness and winter, which was associated with death and decay.

October 31st is the day the Celts believed the boundary between the living and the dead opened, letting the dead come back to revisit earth.

The first citywide Halloween party that was official took place in 1921. Halloween finally showed up on official calendars, along with All Saint’s Day.

In the 20’s and 30’s, the holiday started to become more like today’s vision, and became  more community centered with having parades and large bonfires. People began to know what the day was and it’s meaning.

Early celebrations started  with having masquerade parties, and the holiday blossomed to become more community centered. With bobbing for apples, dressing up, and handing out candy, the 2nd most celebrated holiday in the United States was in full swing.

History is always writing and rewriting itself as the years go by. With everyone having different traditions, continuing to celebrate this historical holiday will help the spirit of Halloween flourish for future generations to come. 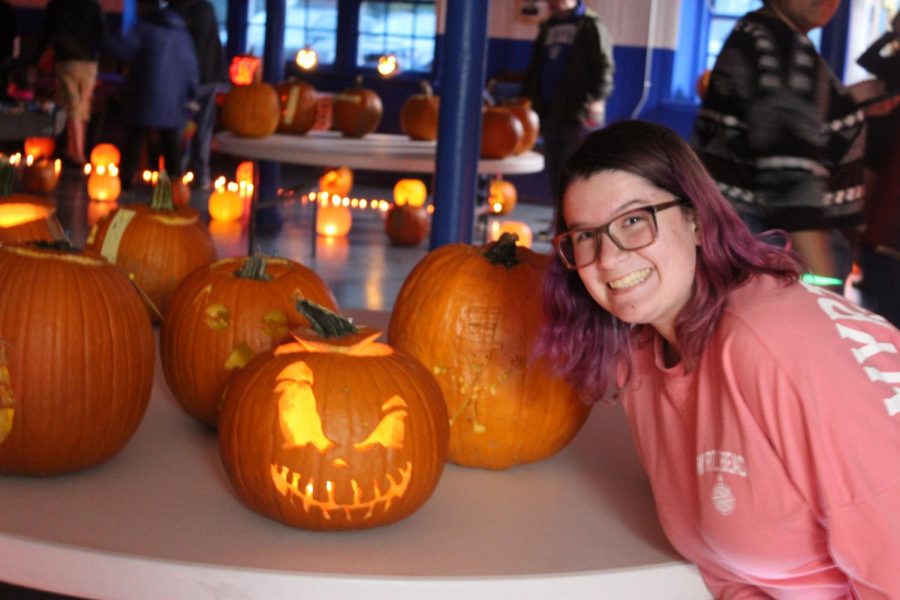 Hensley and her carved pumpkin

A tradition that has been carried out for more than 20 years came back for the 2018 fall season in Fort Thomas. The Pumpkin Walk was held on October 26th at Tower Park between 6 p.m- 9 p.m. All kinds of family fun just in time for Halloween.

Due to rain, the event took place in the Fort Thomas Armory. As little kids walked by holding their parent’s hand, the armory was packed with people and Halloween blow ups.

Carved pumpkins were on display in every corner, some by the windows and others carefully placed on the ground. With a path made of Halloween lights to lead the way, every single pumpkin was lit up for all eyes to see.

A lot of younger kids carve pumpkins for the contest. However, the contest has no age limit.

Perry Hensley, junior, participated in the event, and has been putting her pumpkins in the contest for years.

Hensley stated, “I have done the pumpkin walk since I think about the 6th grade. I’ve won the contest twice. One time it was first and the other it was second.”

Entering a contest with so many people can be overwhelming. But there are eight categories to enter according to Hannah Huey, senior, who works at the armory.

The Pumpkin Walk overall is known as a family event to bring people together. The armory had plenty of picture opportunities for families, and they even played Hocus Pocus this year as well.

How many pumpkins were actually placed in the walk? Katie Spicer, Huey’s boss at the armory, provided a pumpkin count.

Spicer said, “280 pumpkins were delivered. The event has been going on for 20 plus years. It’s the best!”

For the high schoolers at Highlands, Hensley encourages people to come to future walks and to enter in the contest.

Hensley said, “I think it is still important for Highlands kids to go because it brings our community closer, and it will help our school grow.”

With the event coming to a close, the rain had started to die down. It was a perfect, chilly October night for families to go back home and enjoy comfy blankets. Overall, it was an evening that was enjoyable for everyone.