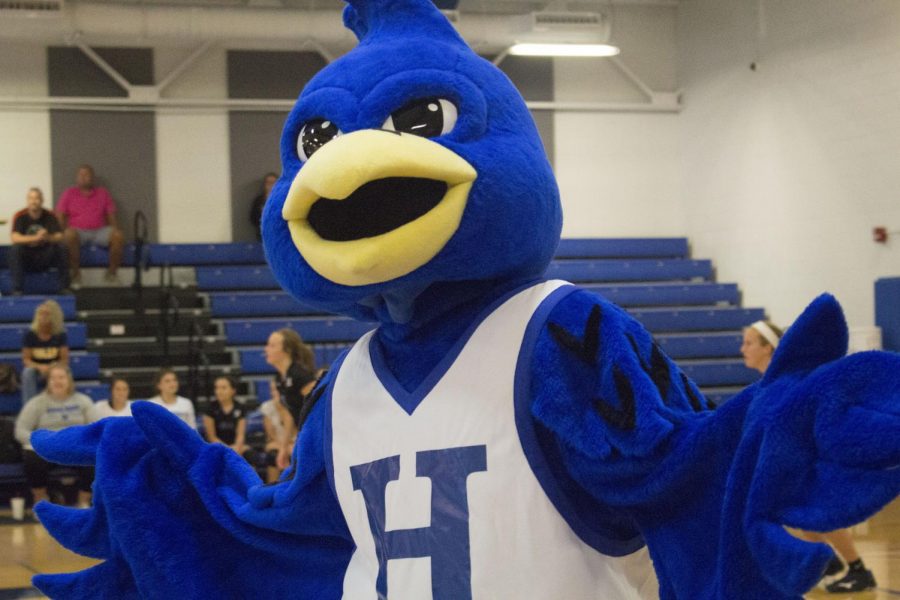 The Highlands Bluebird Mascot makes an appearance during the Freshmen match to pump up the crowd.

On September 5th, the Highlands Volleyball team won against the Dixie Heights Colonels across the board with the Freshmen, Junior Varsity (JV), and Varsity teams.

The night started out with the freshman team scoring two points. This lead continued until the Colonels tied it five to five. The Colonels took the lead and frazzled the Birds, causing a lack of communication. The colonels kept a three-point lead until the Birds tied the score at 17-17. From there, it was a battle until the Birds won with a score of 23-21.

The Birds took this momentum and gained an early six-point lead in the second game with a score of eight to two. The Birds kept a stronghold on this lead for the first half of the game until the colonels tied at 15-15. However, this didn’t frazzle the Birds, as they ended up winning the second game with a final score of 21-17. The Freshman team took the first match of the night and paved the road for the JV and Varsity teams.

The JV team started out similarly to the Freshman team with an eight-point lead, leaving the score at eleven to three. The Colonels tried to come back, bringing the score to eleven to seven, but, with a slight delay due to the scoreboard going out, the Birds were able to reorganize. The Birds extended their score to 19, while the Colonels stayed put at eight. With the help of Junior Maria Little’s serve, the JV Birds won the first game.

Freshman Kristen Egan participated in the student ozone, excitedly cheering on the Birds. “The game was absolutely riveting,” Egan explained, “The Birds straight up blew out the competition.”

The next game started out much closer with a slim two-point lead going to the Birds. The Birds couldn’t gain as much ground, causing the Colonels to be right on their toes throughout the match. The Colonels had the serve when the Birds had match point. Fortunately, the Colonels’ server gave the ball too much power, causing the Birds to win the second match of the night.

Because the Freshman and JV team won their matches, the Varsity team came in with high hopes. The first game started out close once again, however, the Birds still ended the first half of the game with a three-point lead. The Colonels weren’t backing down, however, and lowered the Birds’ lead to one with a score of 13-12. Luckily, the Highlands football team came with spirit and pride to cheer on the volleyball Birds. Led by the Bluebird Mascot and Athletic Director Kevin Nieporte, they yelled and cheered to the point where it slightly annoyed the referee. This amped the Birds up, and they ended up winning the first game 25-20.

Junior Laura Winkler, a member of the Varsity volleyball team, was surprised that the football team showed up, but expressed that it helped them a lot. “It really made us more pumped up and gain a lot more energy because they kept cheering for us too,” Winkler stated.

The next game was another uphill battle for the Birds. The score went back and forth, tying between the two teams until the Birds gained a five-point lead with a score of 15-10. They used this lead as motivation until finally winning the second game with a score of 25-17

Nieporte was extremely proud of how the night went. “Dixie is a tough team as they knocked us out of the region tournament last year. We sort of had a score to settle.” Nieporte explained.

With the help of all the students who filled the Ozone, the Birds were able to take the entire night. Come cheer on the Volleyball team at their next home game on September 10th as they face-off versus the St. Henry High School Crusaders.