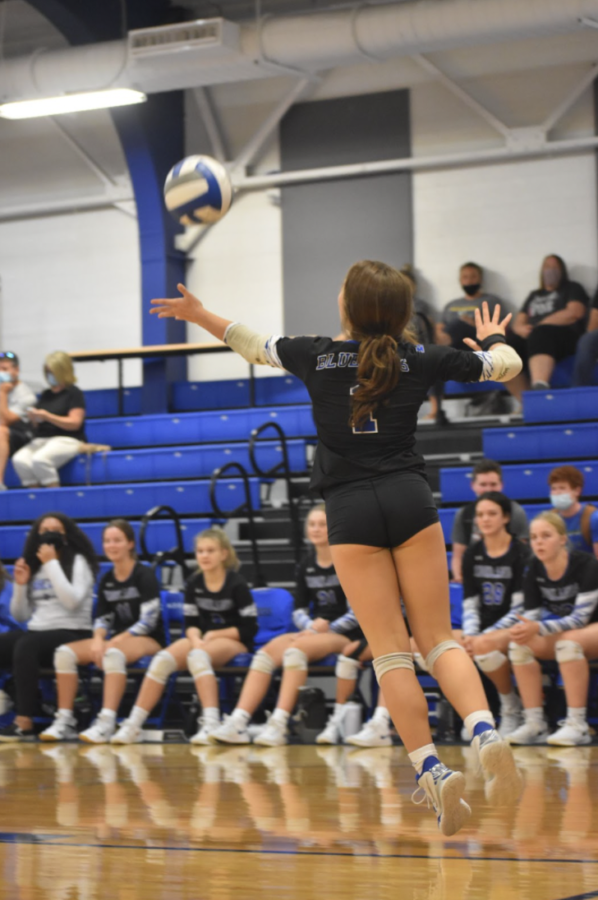 Going in for the serve, eighth-grader Hayden Gessner scores a point against rivals Newport Central Catholic.

This is how it all began for Gessner.

Gessner has been surrounded by volleyball her whole life. Her parents played when they were younger, allowing for her older sister Olivia to play volleyball for Indiana Tech.

Due to being surrounded by volleyball, her parents and coaches figured out her love and potential for the game very early on.

“Hayden has always had a competitive edge, and we knew it could take her far in whatever she would pursue.”

According to Gessner, when she headed into middle school, she made the seventh-grade team as a libero her sixth-grade year. A libero is a back-row defensive specialist. The libero wears a different color from the rest of the team and is not allowed to serve or rotate to the front line.

“I was excited to play in the grade above during my middle school career.”

In any sport, playing above your grade level is an achievement and a huge deal.

However, at the very start of the season, Gessner was only playing Freshman and JV.

On August 18 that all changed for Gessner, allowing for her to become a teammate to many experienced players like herself.

“I was really surprised and excited because I knew how good of a team they were, so it was a privilege just to be thought of to be a part of the team.”

Freshman teammate Ellen Mohr was excited about the offer that had been made towards Gessner.

“I wasn’t surprised. I know she is an amazing volleyball player and she worked for her spot on the team. She deserves it all and I was so happy for her when I heard the news.”

Getting to where Gessner is now, came from a lot of hard work and dedication throughout the years.

Between practices, games, and tournaments, Gessner is always trying to get in the gym to improve her skills.

“Every day my mom or sister will ask me if I want to go up to the gym, and they’ll work with me for hours on end. They will also find people to help me get better.”

Besides playing for the Bluebirds, Gessner also participates on a club volleyball team. This club plays in many expedition tournaments and camps to help young athletes become more well known. This program helps young athletes to show their skills to coaches in hopes of earning a scholarship.

She had started doing club volleyball with her friends for the league Northern Kentucky Junior Volleyball (NKJV). The program consisted of rigorous traveling and a lot of hard work.

Despite already being on the varsity team, Gessner and her coaches still have more goals for her to accomplish whether it be a skill or team goals.

“My goal for next year is to try to form that connection with the team and try to bring us together like the way the varsity team and especially the seniors brought our team this year.”

This is not the end of Gessner’s success. She hopes to improve as she continues her volleyball career.

According to Gessner’s mom, volleyball has taught her daughter many life lessons.

“I think [volleyball] has taught her many things in life like how to work hard, be disciplined, and how to be a good teammate. It has helped create a special bond with her sister in their shared passion for the game.”