Shooting for the stars: the marching band’s great start to their season 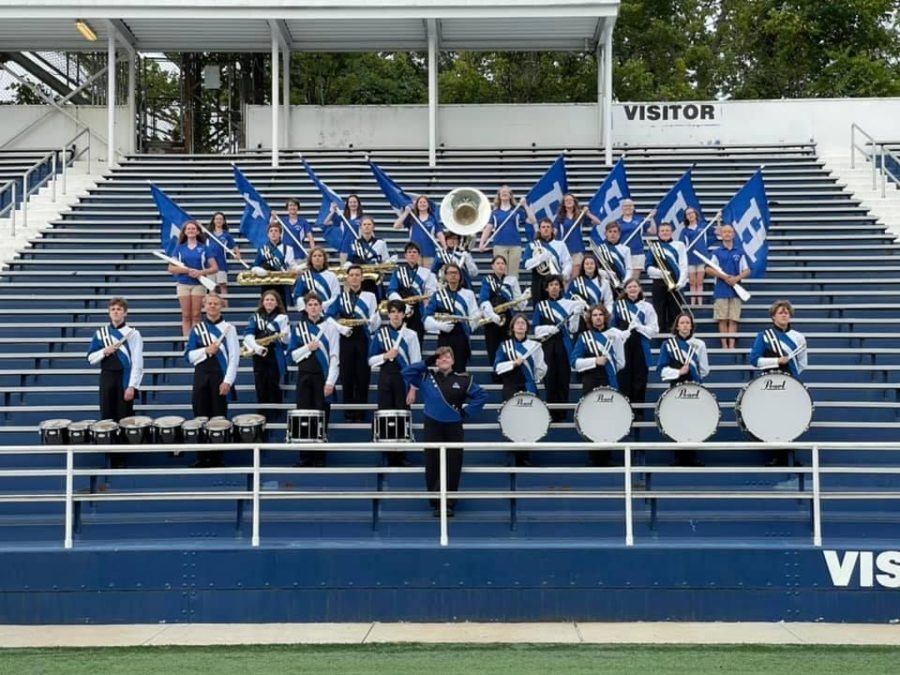 As Highlands High School gets called, the performers walk onto the field, their friends and teammates all around them. Taking their places on the field they wait anxiously for the drum major’s signal to begin their performance.

The theme for this season is “Into the Cosmos,” which is a space-centered show, according to Senior Drum Major Brandon Anderson.

“It’s an out-of-this-world journey that takes you into space, from right before liftoff all the way to touchdown back on Earth. The music and drill are incredible and I overall am just absolutely in love with the show.”

The seniors are a big part of their success, according to Band Instructor Lori Duncan, who are Allison Bertasso, Drum Major Brandon Anderson, Ashton Boggs, Alix Tibbs, Evelyn Huth, and Jacob Hudson.

According to Tibbs, the marching band has high expectations for themselves as they want to keep up the image of Highlands, hoping to add another trophy to their shelf.

“This season has been very difficult and full of pushes and pulls in every direction. We have such high standards for ourselves and that really shows after we come back from such a crazy time like COVID-19.”

Over fall break, they will perform at Universal Studios, which the marching band, guard, and instructors are very excited about.

The marching band hopes to win a spot in the finals at the mid-states championship according to Duncan.

“The group has a great attitude and strong work ethic. I think it’s going to be an amazing season.”

They will also be hosting Thomas More University’s marching band on October 15, and they will be performing at halftime during the football game against Covington Catholic High School. According to the Marching Band Instructor Lori Duncan, Thomas More has several HHS alumni in their marching band.

Tibbs is confident in this year’s marching band students.

“I think with the way we push added to our high expectations at Highlands, we are going to have to make some room on our trophy shelf this season.”