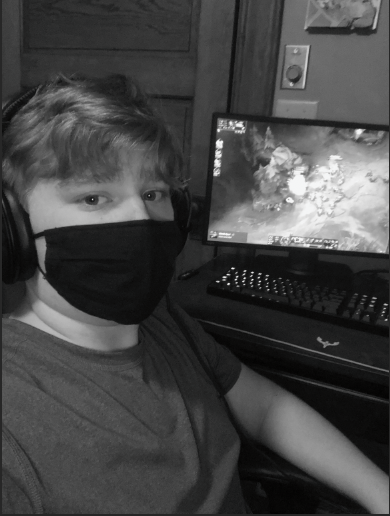 When Junior Zack Fisher is in the middle of a game, there is nothing that will stop him from winning. The intensity and pure focus fire up his adrenaline, and once that happens, he always comes out on top. This drive to win makes the E-Sports club very popular to many who not only want to meet new people, but also wish to have an enjoyable experience that does not involve physical exercise or strain on the body.

Fisher was on a path to complete his first season with the E-Sports club last year until everything changed In March – COVID-19 had stirred up enough commotion to totally end the season. This was devastating news for Fisher, he had worked the whole season to get better not only as a team, but by himself, just to watch it all end with one blink of an eye.

After losing the opportunity to compete last year due to COVID-19, Fisher is excited to have a chance at winning a championship this year. He will stop at nothing to up his game in every way possible. Fisher’s dedication inspires his teammates to put in the same time and effort to become more skilled.

Before and after Fisher’s season ended, he and most of the members of the E-Sports club would play from home on their personal computers. They would continue progressing their skills throughout the season. With new changes to the club, members can now participate in meetings from home. This change benefits a great number of players who already have a personal computer at home where they play. This allows most of the club members to continue to participate throughout the season.

Fisher commented, “I don’t know exactly how the other people on the team feel about the changes, but I think that the change to playing at home will benefit some people.”

The E-Sports club is still able to communicate and play through games and social media, but many other clubs at Highlands Weren’t as fortunate. This year, the E-Sports club got another chance and will destroy any team in their path to get to the top.

Fisher has big plans for this season. “Our plan for this year is to win a state championship.”