The fight for social justice injects itself into the NBA 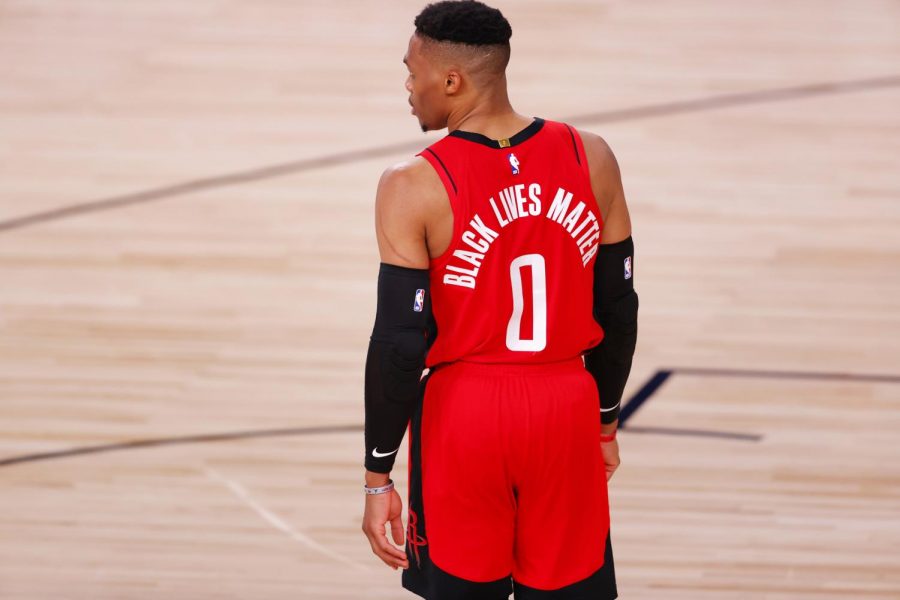 NBA player Russell Westbrook with “BLACK LIVES MATTER” on the back side of his jersey replacing his last name. Photo courtesy of Fansided.

The Walt Disney World Resort in Orlando, Florida was silent on the night of August 1. The Denver Nuggets were playing the Miami Heat. The arena looked totally different. “Black Lives Matter” was written on the floor, people were distanced with masks on, and messages like “Breonna Taylor,” “Police Brutality,” and “Equality” were embossed on the back of players’ jerseys.  The virtual crowd was silent.

National Basketball Association (NBA) players decided to print social justice messages on their jerseys in light of the Jacob Blake incident, in which he was shot seven times in the back in front of his children when trying to break up a police fight. He is now paralyzed from the waist down. This incident made an impression on NBA players, as this was when they realized things were starting to get bad. Therefore, they decided to make a change with the messages on their jerseys.

NBA players are very aware of the situations going on during this time, such as the deaths of Breonna Taylor and George Floyd, police brutality, the Black Lives Matter movement, and more. Because of this, they decided to use their status and popularity to show awareness of and support for what’s going on by putting social justice messages in place of their names on their jerseys. There are over 350 players with these messages on their backs, though 50 others decided to keep their last names.

Many other professional sports are handling the fight for social justice in the same way as the NBA.

The National Football League (NFL) is also working on raising awareness for social justice issues.  The NFL isn’t letting players change jerseys like the NBA, but they are allowing them to wear shirts with slogans such as, ”Stop Hate” and “It Takes All of Us.” Players are also permitted to have names of victims on the lower part of their helmets to raise awareness.

Another act that players have done is kneeling. This was first seen in 2016 when Colin Kapernick knelt during the national anthem in protest and to spread awareness about social injustice. Afterward, he was kicked out of the NFL and has not been able to play since that day. He has now been sponsored by multiple big names such as Nike with the slogan “ Do something even if it means sacrificing everything.”

Players have always stood for what they believed in, often earning reprisal from the NFL in the process. However, pretending to be apolitical in the NFL is as much a brand as standing for something.

Many students feel as if this fight for social justice seen in professional sports is very important, especially now.

Freshman Matteo Matteoli said, “Spreading awareness helps others know that this is a bigger problem than they actually think it is. I believe they should truly raise awareness [for Black Lives Matter] because it shows how this injustice is still going around and is still a big setback in world peace.”