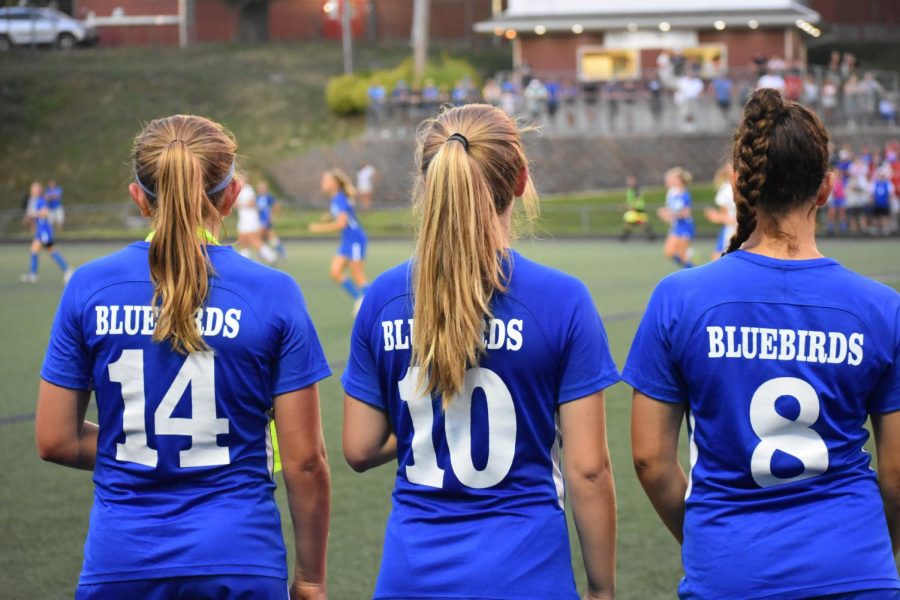 Yesterday, the Highlands Varsity soccer team went out to compete against the Notre Dame Academy Pandas in their first soccer match of the season in a one to one tie. For years, the teams have been rivals, just as the boys’ team is with Notre Dame’s “sibling school,” Covington Catholic. The game was held at our Tower Park soccer complex and kicked off at 8 PM.

The birds began successfully when, not far into the first half, Senior Lauren Deckert sailed in a penalty kick, bringing the team up to one to zero early in the game. The Ozone, which was decked out in a red, white, and blue theme, went crazy along with the rest of the fans. Deckert said, “To score the first goal of the regular season as a senior feels great, but to score against the Pandas makes it even more bittersweet.” As the half progressed, the Birds were unfortunately unable to get the ball in the net, despite many shots.

However, in the twenty-first minute, Notre Dame scored an unlucky goal, tying the game up one to one. Despite this setback, the Birds did not give up the fight and continued to push on, winning 50/50 balls and defending their goal aggressively. Just a few short minutes after Notre Dame scored, Senior Kelsey Mathis went down, due to a shove by an opposing player and sustained an injury to her neck.

The rest of the first half was generally uneventful, but the Ozone didn’t make it seem that way. Led by Seniors Audrey Graves and Nate Gesenhues with help from Athletic Director Kevin Nieporte, the Ozone got fired up and did a grand array of cheers including “Rollercoaster,” “Hey Bluebirds,” and “Do It.” The Ozone got so into the game that they even cheered back and forth with Notre Dame, although those cheers mostly consisted of us out cheering them!

At halftime, heat lightning was detected in the sky, causing a half hour delay, as well as a drop in the crowd, but that didn’t stop the Birds from coming in strong the next half. Senior Maria Broering felt the Birds pulled out a great performance despite the circumstances. She stated, “Playing against NDA is always hard, but I think we did well especially considering it was our first game. We have a really challenging schedule this year, but playing against good competition will help us to improve for the post season.”

With only about fifteen minutes left on the clock, a second lightning delay concluded the game, as the officials decided that enough of the match had been played and called a tie, ending the game one to one.

In general, the Highlands LadyBirds Varsity soccer team looks as they will have a successful season in the future, and hopefully be able to make it to the State Finals on November 2nd. Come support the Birds on August 21st as they take on the St. Henry Crusaders at St. Henry High School!