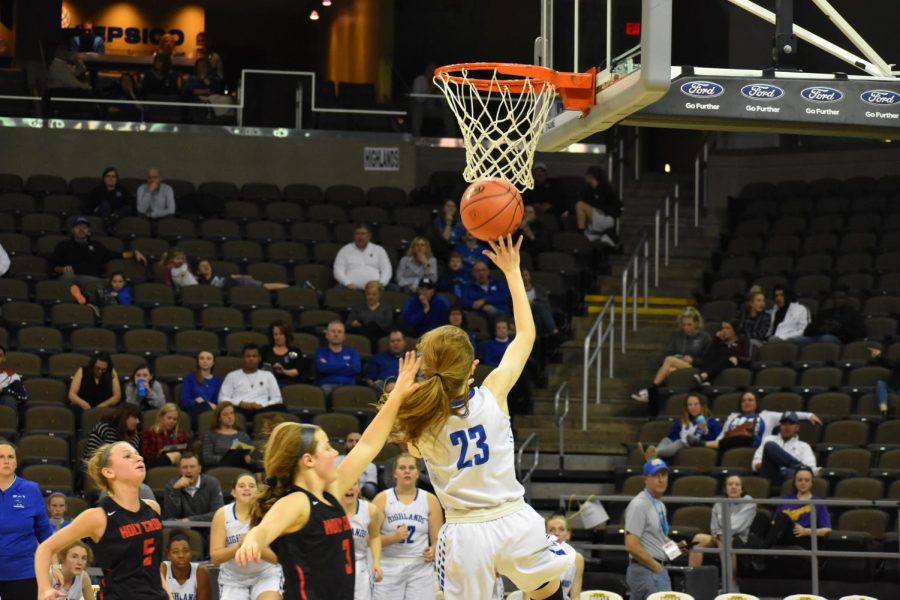 On February 27th, the Highlands Girls’ Varsity basketball team won against the Holy Cross High School Indians in the Regional Quarter Final with a final score of 72 to 46.

Senior William Bertsch, a cheerleader for Highlands, was excited about how the game went. Bertsch stated, “Our band showed and played beautifully. The girls had an amazing game and pulled ahead in the beginning.”

In the first eight-minute quarter, the girls pulled ahead remarkably. However, they also earned four fouls while Holy Cross earned 0. The score by the end of the first quarter was 17 to 8 Highlands.

The birds did not stop there. They continued to pull ahead by expanding their 9 point lead to 16. Highlands also earned three more fouls while Holy Cross earned two on the board. By the end of the first half, the score was 31 to 15 Highlands.

When the second half started, the Birds were still hot and were not ready to give up their lead. The game did start to get chippy, with 13 new fouls on the scoreboard, eight went to Highlands while five went to Holy Cross. By the end of the third quarter, the birds remained in the lead with a score of 51 to 34 Highlands.

The game ended with Highlands having a 26-point lead, and the final score was 72 to 46 Highlands.

Assistant Principal Jeff Schneider was pleased with how the girls did, “Just a continuation of a great season. It would be nice to see us a regional final and keep up the good work,” Schneider stated.

The Highlands Girls’ Varsity basketball team will move on to the semi-final of the Regional Tournament. They will be going up against Dixie Heights High School Colonels. The game will be on March 2nd, at 12 pm at the BB&T Arena.