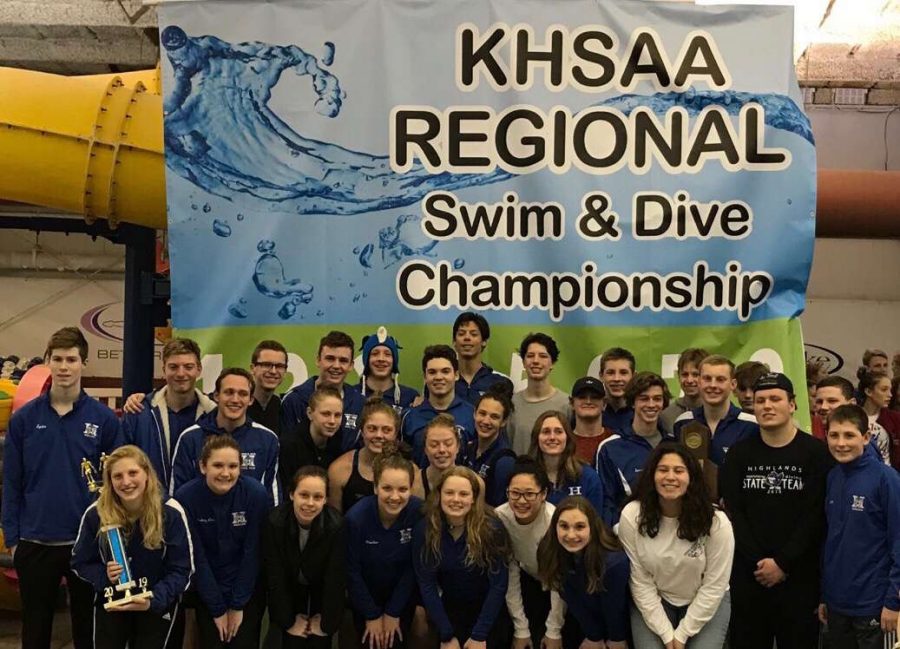 Last weekend, tradition was broken as the swim and dive teams crushed the competition at regionals.

On Saturday the 9th, the dive team competed at Scott High School and the swim team at Silver Lake, the host school being St. Henry, but both felt the same type of nervous energy. “I was very nervous starting the meet but after I went off the board the first time I was a lot more relaxed,” stated diver, Kenna Abner.

Both the meets had approximately 20 teams present from around our district, meaning there was some stiff competition from schools like Covington Catholic, Notre Dame, and Ryle.

The swim team was first in the boys and the combined scores, however, the girls placed 3rd, falling short to Ryle and Notre Dame. The combined team won its 8th straight win scoring over 800 points; the second-place team was left in the dust, scoring a staggering 310 points behind Highlands.

While many records from the past couple years were upheld, amazingly, 3 records were broken. Caroline Sand, junior, with a time of 51.77 in the 100 freestyle broke her own record she had set last year. Jack Banks, sophomore broke 2 records. Bank’s time of 51.32 in the 100-butterfly broke Steve Gracey’s 1995 record of 52.47. Jack also broke the 100-breaststroke time set by Scott van Epps’ in 1995.

What was even more exciting than winning the meet for some swimmers was breaking the 17-year tradition of coming second to Covington Catholic. “The best thing to happen at the meet was to see Highlands completely obliterate Cov Cath in the 400- free relay,” stated swimmer, Rachel Moscona.

The Bluebirds also crushed the competition out of the water. Even though the dive team has a consistent record, Lauren Groeschen, sophomore, was uncharacteristically nervous before the meet, “I had been pretty inconsistent before this meet, but I plugged my headphones in and did my thing.” Groeschen pushed away her nerves and managed to score 6th in the competition which qualified her for state. The dive team overall had 5 people qualify for state, Finn Murphy, junior, who placed fourth, Robert Arnberg, eighth, Kenna Abner sophomore, seventh, Lauren Groeschen who placed sixth, and Lydia Richter, tenth, who was one of the only middle schoolers to qualify.

However, swimmer and senior Brendan Conley’s biggest achievement wasn’t necessarily in the water. Brendan won the KHSAA sportsmanship award. To apply, the student had to be a part of the swimming and diving teams and write a 500-word essay about sportsmanship. Conley was chosen out of the entirety of region 7, which encompasses most of Northern Kentucky. He received the award after the end of the meet so he was mentally and physically exhausted but Conley stated, “even though I was tired, being recognized in this way was the perfect ending to my last regional competition.”

Although the swim and dive team did amazing last year, Veteran swimmer Olivia Hopper feels a new kind of drive this year as opposed to previous years. “At state this year we are going to do great because of the depth our team has, we’re a younger team and we have a lot of potential to do great things in the future,” said Hopper.

Overall, both the swim and the dive team crushed regionals and all the athletes are ready to swim and dive into state on the 21st.