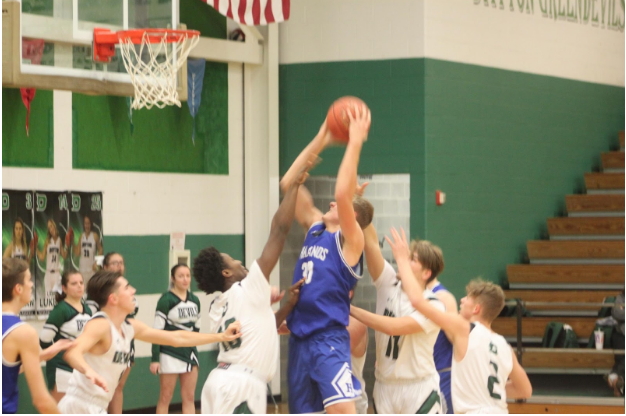 Senior Ben Sisson attempts to score a basket while shooting a jump shot.

On December 11, the Highlands boys’ varsity basketball team won against the Dayton High School Devils with a final score of 75 to 38.

The game started off with Highlands earning 7 points right off the bat while keeping Dayton at bay with a score of zero. As the first 8-minute period went on, Highlands was able to gain an 18-point lead with a score of 27 to 9.

Highlands earned 7 more points at the start of the second period, which brought their lead up to 25 points. However, they did not stop there as Dayton struggled to fill the major gap between the two scores.

By halftime, Highlands had a remarkable 33-point lead with a score of 46 to 13. During the halftime break, the birds went into the locker room to have a quick meeting but immediately returned to the court to get a few minutes of extra practice in.

Senior Grady Cramer was pleased with how the game was going and how the team was staying composed.

“We just came out and got our basics done,” Cramer explained.

When the third period began, Highlands earned the first 4 points, bringing their lead to a whopping 37 points. Dayton tried to take back control of court by earning 5 points but was shut down by two dunks by seniors Ben Sisson and Nate Roberts. This brought the scores to 54 to 18, Highlands.

Dayton was able to lessen the gap between the two scores, and by the end of the third period, Highlands had a 35-point lead with a score of 59 to 24.

The fourth quarter ended with 8 seconds to spare, as there was no way for the Dayton Devils to catch up with the Highlands Bluebirds. The final score was 75 to 38 with Highlands nearly doubling Dayton’s score.

“We just did what we had to do to win our first region game and move on from there,” Said Cramer.

This brought the Bluebirds’ record to 5 wins and 1 loss.

Head coach Kevin Listerman was very pleased with the way the team played. “I thought our kids played very hard. We talked in the locker room before, the hallmark of a great team is, regardless of who you are playing, the same effort and the same focus goes into it,” Listerman explained. “I thought all fifteen of our guys brought energy and focus tonight, so I was very proud of them.”