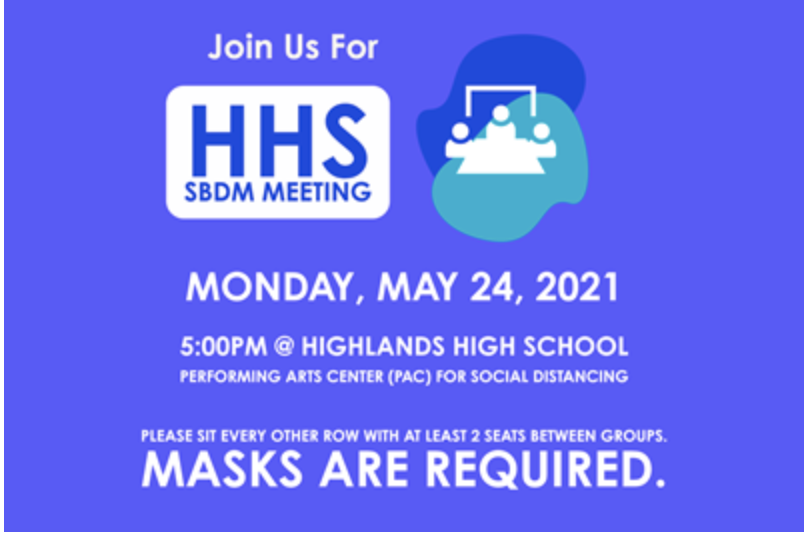 Yesterday, the Highlands High School Site-Based Decision Making Council (SBDM) addressed a much discussed course for the 2021-2022 school year at their May meeting.

The beginning of the meeting included discussion about the newly-hired soccer coach, school policies, and space allocations for the upcoming school year. They also broached a highly-anticipated discussion regarding a new elective course, which is called Social Equity.

The SBDM Council meets on the third Monday of every month to discuss school-related issues including curriculum changes, staff vacancies, space allocation, and more. The six elected positions are currently filled by two parents, three teachers, and an administrator.

This course had previously been approved by the SBDM Council in December 2020. In February of 2021, an unapproved syllabus was shared with members of the SBDM Council for feedback, and according to Principal Matthew Bertasso, it was distributed elsewhere.

Since that time, according to Bertasso, the topic created an “unnecessary division” in the community.

This division was apparent based on the number of voices who showed up to comment publicly. According to SBDM Bylaws, the Council Chair has the power to require a sign-in sheet, and “set limits on the number of persons who will speak to the issue and a time limit for each.” In yesterday’s meeting, it was decided that 20 speakers would be permitted, each with a time limit of two minutes for their comments.

Of these 20 speakers, 12 of them were in support of the Social Equity elective, while seven were in opposition. Three of the supporting voices were current Highlands High School students. The first level of the Performing Arts Center was almost entirely filled by community members, there to listen to the debate.

Prior to the community forum, Bertasso made clear the stance of the SBDM Council. Due to scheduling constraints in the 2021-2022 school year, the Social Equity course will not run. However, it will remain in the course catalogue.