Praying for a better year 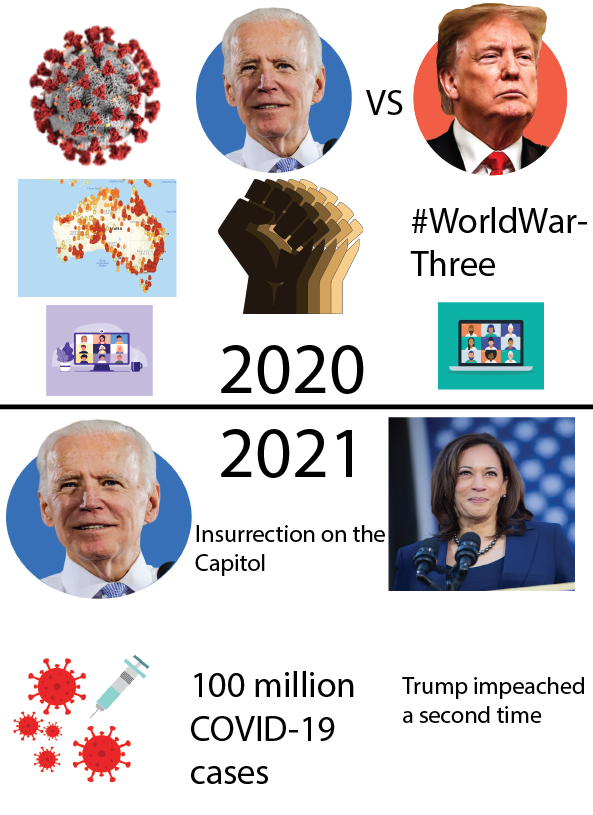 We all know that 2020 was a year full of disasters. From COVID-19 and wildfires to civil rights protests and the controversial presidential election, the question is: Will 2021 be a better year than its predecessor?

There was a riot on January 6 that shook the entire nation. But, with a full year ahead of us, there will be surprises waiting as each month comes upon us. But before we talk about this year, let’s take a look back at 2020.

In early January, the United States was at risk of getting into a war with Iran with tensions rising between the two countries. This was because a United States drone killed Iran’s major general, Qasem Soleimani. This triggered many Iranians as they were shown protesting and burning the United States flag. Meanwhile on Twitter, the hashtag, #WorldWarIII was seen across the social media platform. On January 26, famous Los Angeles Lakers basketball player Kobe Bryant and his 13-year-old daughter, Gigi, died in a helicopter crash with seven other people on board.

During the month of February, a virus made headlines and was named COVID-19. “CO” for coronavirus, “VI” for the virus, “D” for disease, and “-19” for the year it appeared. At first, it was only contained within China and hardly anyone knew about it. Nobody knew, at the time, that the virus would quickly spread to nearly every country.

In March, the World Health Organization named COVID-19 a pandemic. This sparked headlines all around the world with many leaders taking notice and doing everything they could to prevent the spread. By the end of the month, there had been 160,530 positive cases and close to 3,000 deaths. For the first time since it opened, Disney World closed its parks around the world on March 16. The parks would remain closed for almost four months.

In April, morgues and funeral homes in New York City became overwhelmed as the COVID-19 death toll kept climbing. Students across the United States took to online classes due to the increasing number of COVID-19 cases. This kept millions of people at home in quarantine and unemployment skyrocketed.

In May, the number of COVID-19 cases reached nearly six million with a little more than 367,000 dead. Protests sparked across the United States and the world after four police officers killed George Floyd by kneeling on his neck for nearly nine minutes. This caused a serious divide among former President Trump’s advisers as they addressed protests and riots after Floyd’s death. Many cities like Minneapolis (where he was killed), Los Angeles, New York City, Atlanta, and more went up in flames due to these riots. Other countries around the world such as Turkey, Bulgaria, Lebanon, Poland, and many more also participated, either via protests or vigils.

During June, many Black Lives Matter protests sparked across the country, tearing down statues of Confederate soldiers and generals such as Albert Pike and Robert E. Lee. former President Trump slammed these movements saying, “The unhinged left-wing mob is trying to vandalize our history, desecrate our monuments, our beautiful monuments, tear down our statues, and punish, cancel, and persecute anyone who does not conform their demands for absolute and total control. We’re not conforming.” This led to more controversy in the country and a wider racial divide within political parties.

By the beginning of July, the world had breached ten million COVID-19 cases and a little more than half a million deaths. The United States had almost 2.6 million cases and nearly 127 thousand deaths at the time. Additionally, John Lewis, a well known civil activist who worked alongside Martin Luther King Jr., passed away on July 17 from Stage 4 pancreatic cancer. Earlier in the month, on July 4, Mexico surpassed 30,000 COVID-19 related deaths, making it the world’s fifth most affected country. Two days later, the United States began withdrawing from the World Health Organization.

By August 1, the world reached nearly 17.4 million cases of COVID-19 and 675,060 deaths. The United States still led the world with most COVID-19 cases and deaths with 4.56 million cases and nearly 151,300 deaths. On August 4, there were huge explosions in Beirut, Lebanon. The explosions killed more than 200 and over 6,000 people were injured. Around the middle of the month, California’s governor, Gavin Newsom, called for a state of emergency as the heat worsened the state’s wildfires. By August 23, there had been 560 wildfires that had consumed and destroyed one million acres.

At the beginning of October, former President Trump and former First Lady Melania Trump tested positive for COVID-19 after hosting an unmasked, not socially distanced Rose Garden event. The world reached over 34 million cases and a little over 1 million deaths due to COVID-19. Later in the month, an abortion ruling led to massive protests all over Poland. The ruling banned nearly all abortions except those caused by incest, rape, or ones that pose a risk to the mother’s health.

In December, the total number of cases reached nearly 63.4 million cases with about 1.4 million deaths. The United States had about a little over 13,547,000 cases and 268,129 deaths. On the 14th, the Electoral College formalized Biden’s win over former President Trump. Shortly before Christmas, William Barr resigned from his role as Attorney General after finding out that there was no proof of voter fraud. On Christmas Day, a man by the name of Anthony Warner bombed Nashville, Tennessee, killing him and injuring three others.

However, the New Year did not start off well because not even a week into the new year, former President Trump incited a riot to stop the confirmation of the election, which killed five—one police officer and four rioters. This caused outrage not only in the United States but countries such as the United Kingdom, France, Germany, and New Zealand. Due to the insurrection, former President Trump was banned on Twitter, Facebook, Instagram, and many other social media platforms in order to prevent him from causing more violence. On January 20, the United States inaugurated its very first female, Asian-American, and African-American Vice President, Kamala Harris.

Taking a look back on 2020 is quite frightening, considering that every month was filled with a disaster. Whether it be a huge increase in COVID-19 cases and deaths, a death of a beloved celebrity, or a natural disaster that killed many, it is scary to think about how bad 2020 has been. We all hoped for a great start to a new decade but instead, we got disaster after disaster. COVID-19, wildfires, a controversial Presidential election with former President Trump saying that he lost due to voter fraud, Black Lives Matter protests erupt after the killings of Breonna Taylor and George Floyd, and the possibility of World War Three after the United States killed Iran’s, Major General.

So far, 2021 hasn’t been that bad, except for the Insurrection on the Capitol and COVID-19 cases surpassing 100 million. Joe Biden became the 46th and the oldest president while Kamala Harris became the United States’ first female, Asian-American, and African-American Vice President. Things weren’t looking too good for the fifty Democratic and six Republican Senators who wanted to commit former President Trump as the other forty-four Republican Senators called the Impeachment trial “unconstitutional” due to former President Trump not in office anymore. On February 13th, former President Trump was found “not guilty” in his second trial. This year has only just begun but everybody is praying that 2021 will be better than 2020.