OPINION: Who I think should receive the COVID-19 vaccine first 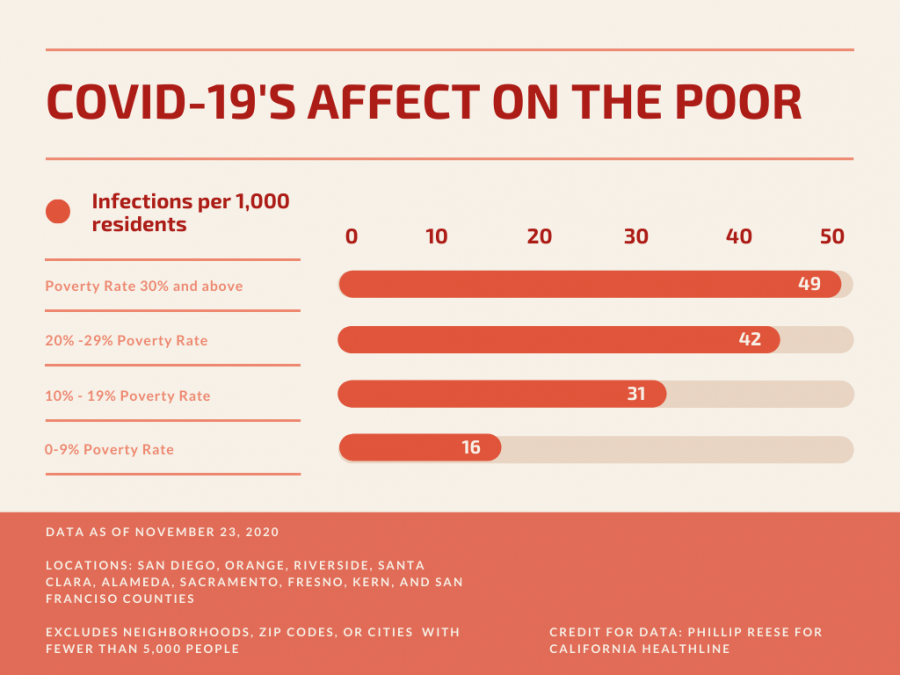 This graphic shows the risk factors that are involved in areas with high poverty rates.

There are a set of variables when it comes to deciding the fate of billions of human beings. So, it is understandable that there are a lot of feelings and opinions attached to how the vaccine is being distributed.

According to data from the COVID-19 Resource Center, areas with a high marginalized and minority population were hit the hardest by the virus early. In significantly non-white countries with higher median incomes, infection and death caused by the COVID-19 pandemic were three times higher than countries with substantially white and higher-income populations. Although it is still unclear if neighborhood poverty correlates with deaths and infections of the virus, more studies are needed to determine health inequalities for communities and individuals who are in poverty.

As half of the world’s population live in urban areas, during the pandemic, according to the Thomas Reuters Foundation, there is nowhere else where the virus has been more present than in urban areas. This proves my point that individuals in high-risk areas should receive the vaccine before individuals in higher-income areas, who do not suffer from medical problems which could leave them prone to infection or death.

It is no secret that COVID-19 has caused death, but the social and economic effects of this virus are clear. According to Gavi, a vaccine alliance, when businesses closed it caused 400 million full-time jobs to be lost. Along with this, it has been proven that women have been more affected by the virus, as they have a larger portion of workers in jobs that are directly affected by COVID-19, such as health and social care workers. In 2020, the poverty line has risen to 7.1%, and extreme poverty has risen for the first time in 20 years.

In Kentucky, specifically Louisville, which has the most polluted air out of all America’s mid-sized cities. In the neighborhoods around Louisville, such as Rubbertown, where there are predominantly black residents and is home to Louisville’s chemical industries. In these west-side neighborhoods, people are twice as likely to have asthma and heart disease, along with four times as likely to have chronic obstructive pulmonary disease, and six times as likely to have heart disease compared to the largely white east-side neighborhoods, according to the Centers of Disease Control and Prevention (CDC). These health complications leave neighborhoods very susceptible to COVID-19. A CDC study found that 75% of victims who had to be hospitalized from COVID-19 had at least one of these conditions, and their outcomes from this tended to be worse than hospitalization. This is especially dangerous as COVID-19 can cause serious and possibly deadly lung damage. Polluting industries are much more likely to be in low-income and minority communities. When you look at who survived versus who died from COVID-19, the results are not equally distributed between races and places, along with those who live in poor communities with horrible pollution, rather it is water or soil contamination issues. This is why there needs to be a priority for low-income and impoverished communities to receive the vaccine sooner rather than later.

So, if we were to prioritize who got the vaccine based on where they are located and their medical problems, we would be able to use the vaccine more efficiently and effectively in the long term.