“Out of sight, NOT out of mind” 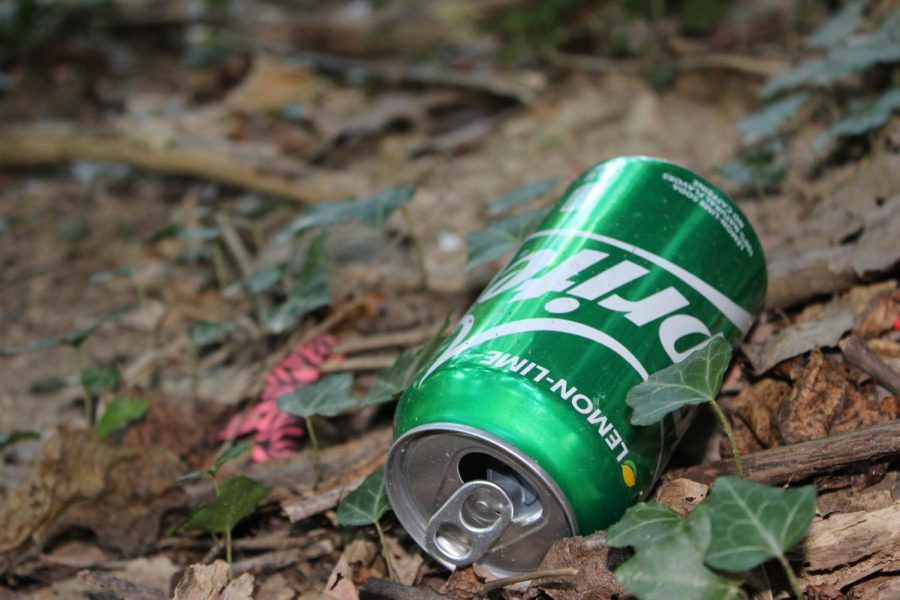 An empty Sprite can resides amongst the new plant growth.

Just two short weeks ago, Mrs. Colleen Epperson, the AP Environmental Science (APES) teacher made a shocking and terrible discovery when scouting the campus to find a location for an outdoor classroom. The woods and creek behind the bleachers had turned into a full on dump.

Once an area allocated to serve as an outdoor learning space, trails cleared in the small patch of woods were full of trash that had been carelessly flung over the back of the main bleachers~ or over the fence near the small snack shack and middle school bleachers. The trash that had accumulated in the area was not merely coincidental either as items, such as a full lamppost, pieces of chain link fence, and large scraps of blue-painted wood were flung back into the abyss to “never be seen again.”

Unfortunately, that’s just the issue. As people throw trash places, be it behind the bleachers, in the woods, or on the other side of a wall around town, the trash is out of their immediate line of vision and hence is declared “gone” in their mind. However, the trash is anything but “gone”. Instead of being put in a garbage can and going to the landfill, the litter piles up, polluting waterways, cluttering habitats for local wildlife, getting stuck in trees, and layering up on the ground, prohibiting new plant growth.

Upon the discovery of the immense piles of litter behind the bleachers, Epperson and her APES students immediately wanted to host a school-wide clean-up to help remove the litter behind the bleachers. They hoped that though this, the area would not only be a cleaner environment for the wildlife living there but could also begin to serve a purpose as an outdoor classroom.

Epperson and Mrs. Del Ehemann, chemistry teacher, began to spread the word in their classes, encouraging students to attend the clean-up, which was scheduled for Sunday, September 29th. On the day of the clean-up, the turnout was strong, with over 40 students in attendance, gloves and trash bags in hand.

However, despite the fabulous turnout, the students (myself included) realized that a lot more work would need to be done to bring the area to its former glory. Originally estimated to take about an hour and a half, the students were still working hard at the two hour mark, with not much obvious progress in the worst areas. Hot, exhausted, and out of trash bags, the students left the trail behind the bleachers with a major take away~ the trash problem was much worse than it first appeared.

The students who participated, disgruntled with the lack of obvious productivity, began pointing fingers at who caused the mess, especially the giant piles located behind the ozone. The first to be framed were the freshman. Since they sit at the top of the bleachers and hence would have the most ease at throwing trash overboard, they were to blame, right? And they needed to clean the trash up themselves, right? Not necessarily.

First off, the current freshmen haven’t been “the freshmen” forever. There was a time when almost every single student at this school was a HHS freshman and sat at the top of the bleachers, giving them equal opportunity to hurl garbage into the abyss. Not only that, but there have also been years and years of students sitting in the ozone well before any of the current students even arrived at HHS, and, according to the years (1994, 1996, etc.) on some of the old soda cans tossed away, not all of the trash was recent.

Secondly, numerous old, split open trash bags were what created the biggest piles of trash. No freshman would bring a whole bag of trash to the game just to throw over the bleachers. So who was? The pointing fingers were then shifted towards whomever cleans up the bleachers after the football games, assuming they picked up the bleachers and then just tossed the trash bags overboard.

But before we discuss that, I’m going to go off on a tangent real quick, so bear with me. This past Friday, after the Conner vs Highlands game, the bleachers cleared out rapidly due to a) Highlands did not win and b) students weren’t allowed to hang out on the field after the game due to the University of Kentucky marching band. So, I was able to get a solid look at the absolute chaos that remained on the bleachers post-game while I was walking up to the press box to grab my camera. There was trash everywhere; soda cans, bottles, an old chewing tobacco container, plastic utensils, paper plates, and wrappers blanketed the seats and aisles.

Easily, all of that mess left behind could have easily been “packed out” by whomever brought it in to begin with, but laziness or incompetence or whatever left the bleachers looking like a plastic, paper and Styrofoam war zone.

So, yes, likely at one time or another, the bleacher cleaners got tired of hauling bags of trash down to the dumpster after the games and just started whipping it over the back of the ozone. But, if people hadn’t left so much trash on the bleachers to begin with, the issue would have never existed.

When fans leave trash on the bleachers, they probably don’t put a second thought into where their waste just might end up. All they know is by the next Friday Night Lights, the bleachers are free of debris again. Even if Highlands was to put out a video, say, promoting packing out (or at least properly disposing of) trash, bad habits have already developed in fans who are used to leaving their garbage behind. Combined with the fact that fans have never before been persecuted for leaving trash in the stands, they probably wouldn’t care much about the regulations and would likely ignore them… even if by accident.

However, the wonderful idea of just making people bring their own products stops there. At a game, foods such as hotdogs, pizza, and hamburgers can’t just come without a plate. Although this would eliminate the waste they create, it would also upset game-goers by not allowing them to set food down. Though, in theory, everyone could bring their own plates to take home and wash, the thought is laughable, as those who can’t pick up their own empty can of soda would never pack in and pack out dirty dishware to games.

Also, items like candies and chips would have to be eliminated from games altogether, as there’s no way to distribute these items without some sort of packaging. Even though eliminating single use products and wrappers would be nearly 100% effective, the feasibility is zero at a high school game.

This circle of thought disgruntled me quite a bit as, after all of this thinking, there emerged no clear solution to fixing the trash issue behind the bleachers. A bleacher patrol? There’d be too many people to watch… and would they be paid? Volunteer? I scrapped it.

Then, I had a second idea. What about people who’d volunteer to go behind the bleachers and pick up trash (and also ensure no new trash gets thrown behind by those sneaky bleacher cleaners!) after every game?

This second idea definitely had feasibility, especially if a small reward, say, free admission to the game you clean up or NHS service hours, was offered. However, like most “grand” ideas, there were still issues to work out. First, the area behind the bleachers was still far from clean. Although the clean-up put in a dent, piles upon piles of trash still remained as well as many of the chain link fences which were thrown back there~ some of which had trees growing through them. Second, there would have to be a coordinator for the program, likely a faculty member, and then it would have to be publicized to find cleaners.

Still, the idea could work… as soon as the initial mess was removed. To finish up the trash removal, my first idea was a school wide clean up. Simply put, if 40 students could remove even a quarter of the trash in two hours, the full 1000 students at HHS could have the entire hill behind the bleachers clean in a matter of minutes. Not only that, but the custodians could get in on the clean-up, too, and aid in cutting the chain link fences from the trees.

The clean-up could easily be performed during an advisory focus period, with each grade going out for just seven of the 28 focus minutes to clean. All that would be needed then would be a whole lot of trash bags and gloves along with a little strategic planning to avoid mass chaos at the entryway to the trail.

Bam! Problem solved. Although there would have to be a group in order to organize the clean-up and post-game bleacher cleaning (maybe after every other game, or maybe just 1-2 times a season?) the idea would allow the area behind the bleachers to serve its rightful purpose, as an outdoor classroom and natural habitat, instead of being a dump.